STOP! Why you shouldn’t make a counter offer 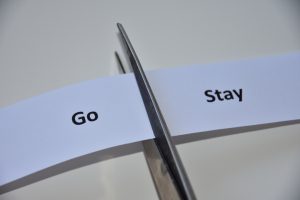 In the current economic climate – just about every candidate we make an offer of employment to is being counter-offered by their current employer.  This enticement to stay takes many forms including more money, job title change, better projects, company cars, larger offices, bonus offers and extended leave.  The list goes on and on. But stop right there. Don’t do it. Let me tell you why.

An employee who hands you their resignation has already emotionally left the building. They made a decision some time ago that the role, position, company, culture or leadership was not for them. Whatever those reasons may be. Let them go.

Your reasons for making a counter-offer probably feel valid including:

(a)  It is easier to get them to stay than to even think about the time, cost and effort in trying to recruit and replace them.

(b)  You don’t want to deal with the unpleasantness of telling the rest of the team. It will hurt the morale.

(c)  They are a top performer and you can’t possibly continue without them. (Rubbish! Everyone is replaceable).

All valid. I get it. I’ve been there.  The first time one of my staff resigned, I was in my early 20’s and invincible….ha! I had to go to the coffee shop to pull myself together and work out my ‘strategy’ on how I was going to keep her.  I tried more money, I tried a change of duties, a change of title…anything, please don’t go.  My attempts were clearly unsuccessful.  It wasn’t about me. It was about her – her career ambition and her desire that we were unable to fulfill at the time.

It is that immediate, but, band-aid attempt to keep someone. We’ve all done it.

Once someone has resigned, there are genuine reasons and needs that are going to be met elsewhere. You are prolonging the inevitable pain that will be felt by both of you over the next 6 months if you do go down the counter-offer path and they accept.

To the company last month that tried offering more money; to the company the month before who offered a bonus plan on the largest account and to the company who said they would finally come through with the company car they had promised a year ago.  It’s too late. Let them go. Counter-offers don’t work.

Next time someone hands you his or her resignation, accept it with grace. This is business – don’t use guilt or persuasion. Stay professional and listen to their feedback – is there anything you could have done differently? Yes? Great – learn it for next time.  Instead, implemented “stay strategies” that will retain your remaining performers.

Salli Tanner who works with me now is a great example of this strategy working effectively.  Early in 2010, Salli worked for me in another organisation, when she resigned. I was sad to be losing her as a valuable member of my team, but I accepted the move being the right one for her and her career at the time. As much as I didn’t want her to leave, I genuinely wished her well and joked, “You never know where we might work together again in the future!” The strategy does work.

Sure, you can be disappointed that someone is leaving, but acknowledging their contribution and wishing them well will go a long way in a market where people talk and employer brand awareness is critical for future hiring. See the opportunity to improve your retention plans, gain some constructive feedback and always leave the employment relationship on a positive note.